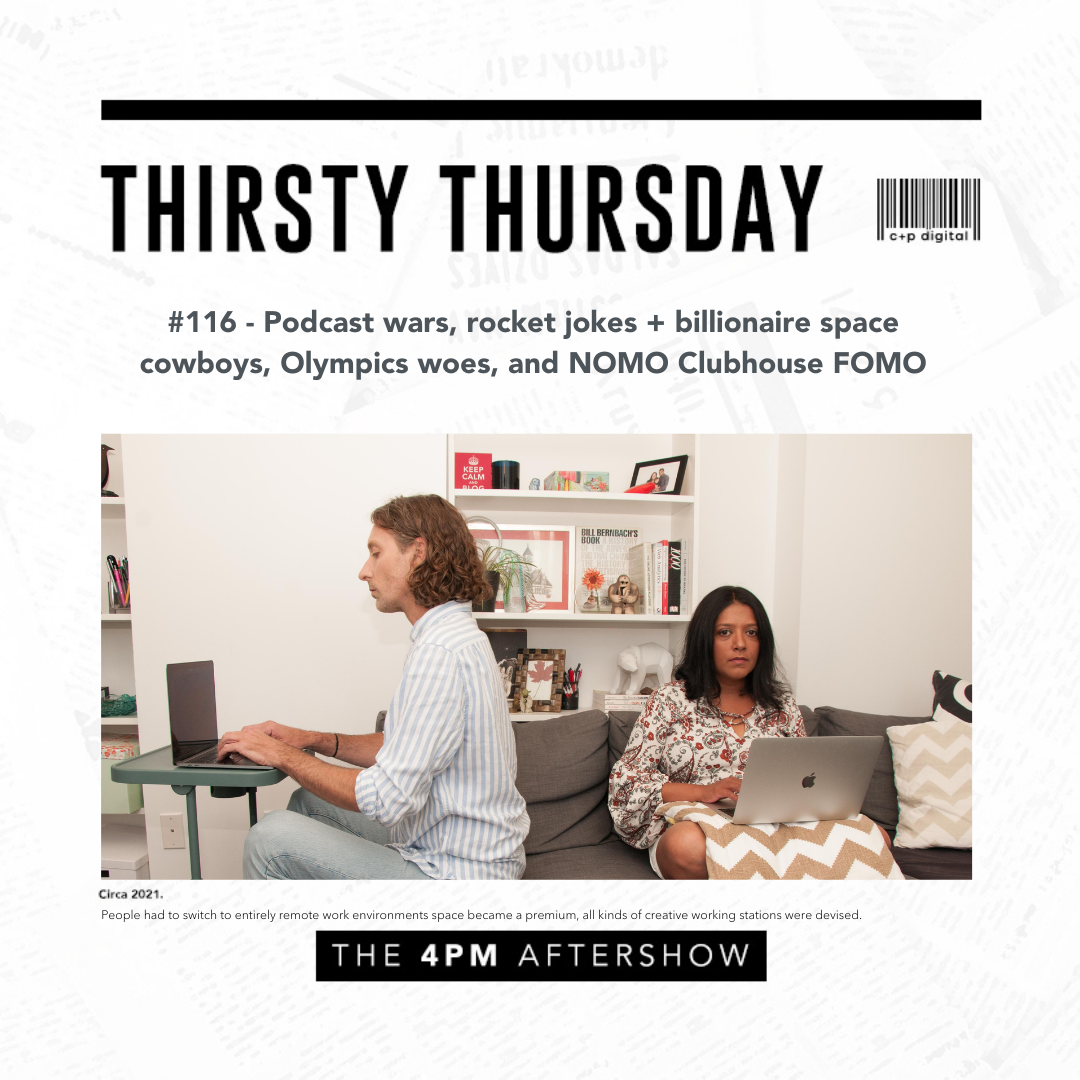 The Brewing Podcasting Wars
Amazon recently purchased one of the top listened-to podcasts, Smartless, — hosted by Jason Bateman, Sean Hayes, and Will Arnett — for 80 million bucks! Their plan?

To release new episodes on Amazon one week before releasing them to other podcasting platforms. This followed Spotify’s recent acquisition of the super popular ‘Call Her Daddy’ podcast and their plans to exclusively host it on their platform.

With podcasting advertising revenue breaking the 1 billion mark for the first time, and no signs of this audio medium slowing down, we’ve decided to start a new regular segment on The Thirst List that we’re dramatically calling ‘The Podcast Wars’.

Is that a rocket in your pocket? Or are you just happy to see me?

We couldn’t NOT talk about this. Billionaire Jeff Bezos blasted to space in a rocket, whose shape had the interwebs giggling with glee. And while we are here for all the phallic memes (oh, and the Dr. Evil comparisons too), we’re especially enjoying the debate about the huge dollars being spent by the trio of space cowboys (Bezos, Musk and Branson) while we have so many ongoing issues on planet earth.

To counter this narrative of what some say is irresponsible spending, immediately following his space trip, Bezos announced two 100 million donations to Van Jones and Chef José Andrés to help them basically change the world.

One thing we want to point out — sometimes it takes visionary, ego manically driven billionaires to push change forward. The advancements they are making now will undoubtedly inspire a whole new generation of space exploration.

As Henry Ford famously said, “If I had asked people what they wanted, they would have said faster horses.”

Olympic Woes
I’m not sure if you’ve heard,…but the Tokyo Olympic Games start TODAY, and boy, has this lead up been a messy one.

Just this week, the director for the opening ceremony was fired for past remarks about the holocaust, the majority of Japanese people don’t want the games happening, some athletes have already tested positive for Covid, leaving major advertisers and sponsors scrambling to put option B plans in place.

Toyota, one of the major advertisers, has pulled all their broadcast advertising for the Japanese audience (they’re still going ahead as planned for other markets) in an attempt to not seem insensitive.

Brands are likely weighing the price being associated with a potential sh!t show vs losing out on money already spent on ads.

FOMO NOMO?
Clubhouse, the audio-only social platform that we all scrambled to check out this past winter, just announced that its ‘invite only’ policy is no more.
Without that FOMO vibe, will Clubhouse lose its appeal? Actually, wait…hasn’t it already kinda lost some of its early appeal?
We’d love to know your thoughts! Do you use Clubhouse still? Do you still see it as an effective platform for reaching new audiences? Hit reply to this newsletter and let us know.