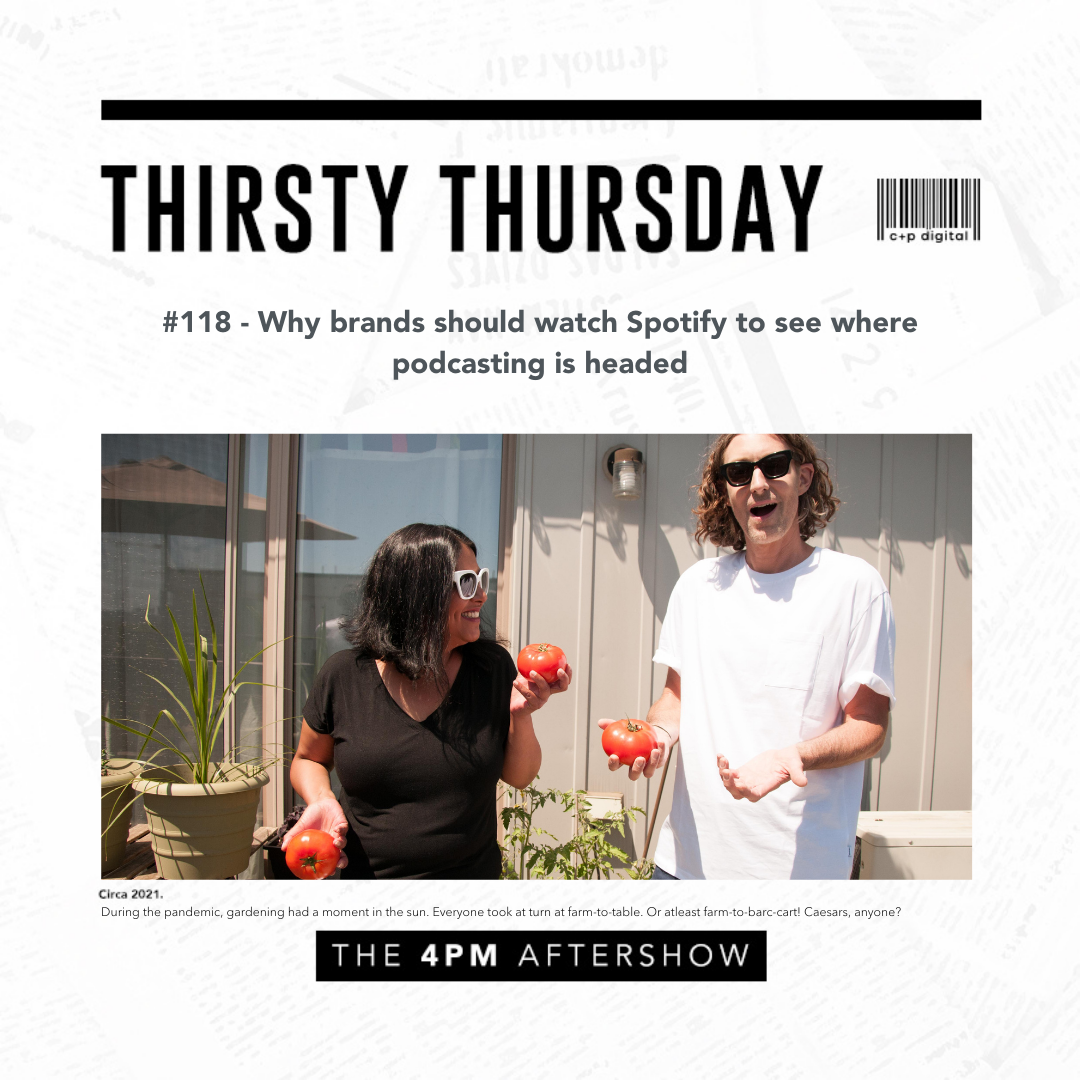 Spotify continues to dominate over all other podcasting platforms, announcing they have 165 million paid subscribers (compared to Apple’s estimated 55 million) and that their ad revenue was up 627% in Q2. Impressive.

This comes on the heels of Spotify continuing to invest heavily in both content and technology: the recent acquisitions of podcast juggernauts, Call Her Daddy (hosted by Alex Cooper) and Armchair Expert (hosted by Dax Sheppard), and a software company called Podz, which allows for automated clips to be pulled from episodes. The podcast wars are heating up, folks. And we promise to keep you informed.

Perhaps the most famous athlete at this summer’s Olympic Games, Simone Biles, shockingly withdrew from competing in the women’s gymnastics team event on Tuesday, citing concerns over her mental health.

Gone are the days athletes had to push through the pain, risking serious injury, and mental health repercussions. These athletes are advocating for themselves and putting their own wellbeing first. We saw this with Naomi Osaka at the French Open. And now Simone is saying her mental health is more important than an Olympic medal.

We applaud you Simone. You really are a true role model.

…And then Michael Andrew is a whole other story

One of the top US male swimmers, Michael Andrew, announced prior to the Games that he was not vaccinated and had no plans to get vaccinated. His rationale? He didn’t want to risk any effect the vaccine might have on his body and performance.

Talk about the utmost display of selfishness and disrespect this decision has towards his teammates (if anyone tests positive they’re done at the games), not to mention towards the people of Japan (who are experiencing record level of Covid cases).

One former Olympic US gold medal swimmer called him out in her now viral twitter rant, while others have defended his right to do what he wants.

This led us to thinking when brands chose to sponsor a big name athlete, you really need to consider things beyond just their athletic prowess. Their social media activity. Their social activism and the causes they support. And are they an anti-vaxxer?!? Is aligning with someone as great a swimmer as Andrew, knowing his stance on vaccines, worth it?

With athletes having to isolate, and broadcasters not having the same access to them as they did during past games, Tik Tok has become the great connector at this year’s Olympic Games.

(Is it any surpirse that a bunch of locked up Gen Z’ers of coure turned to Tik Tok?)

Athletes have been using the platform to share ‘behind the scenes’ moments, such as testing out the cardboard ‘no sex’ beds, their pre-competition preparation rituals, and even the food they’re eating the cafetarias.

Seriously, if you haven’t looked up the hashtag #olympictiktok, do it! It’s just as, if not more, entertaining than the events themselves!

The revenge of the unitard

It seems that some female athletes are sick and tired of being told what to wear when they compete. Especially when what they’re supposed to wear is skimpy, barely-there clothing.

We saw this last week when the Norweigan women’s beach handball team opted to wear biker shorts instead of the mandated bikini bottoms, and then received a fine for not complying.

(Shout out to rockstar Pink for offering to pay their fines)

And this week, the German women’s gymnastics team chose to wear a unitard instead of the high cut, swim-suit style outfit you normally see at competition, as a statement against the oversexualization of women in their sport.

And while we’re on the subject of more inclusive athletic apparel for women, Adidas launched a Burkini line of swimwear in the middle east. And to kick-off the new line, and in a true grandiose Dubai way, they made a billboard that’s a real pool with Burkini-clad swimmers enjoying the water.