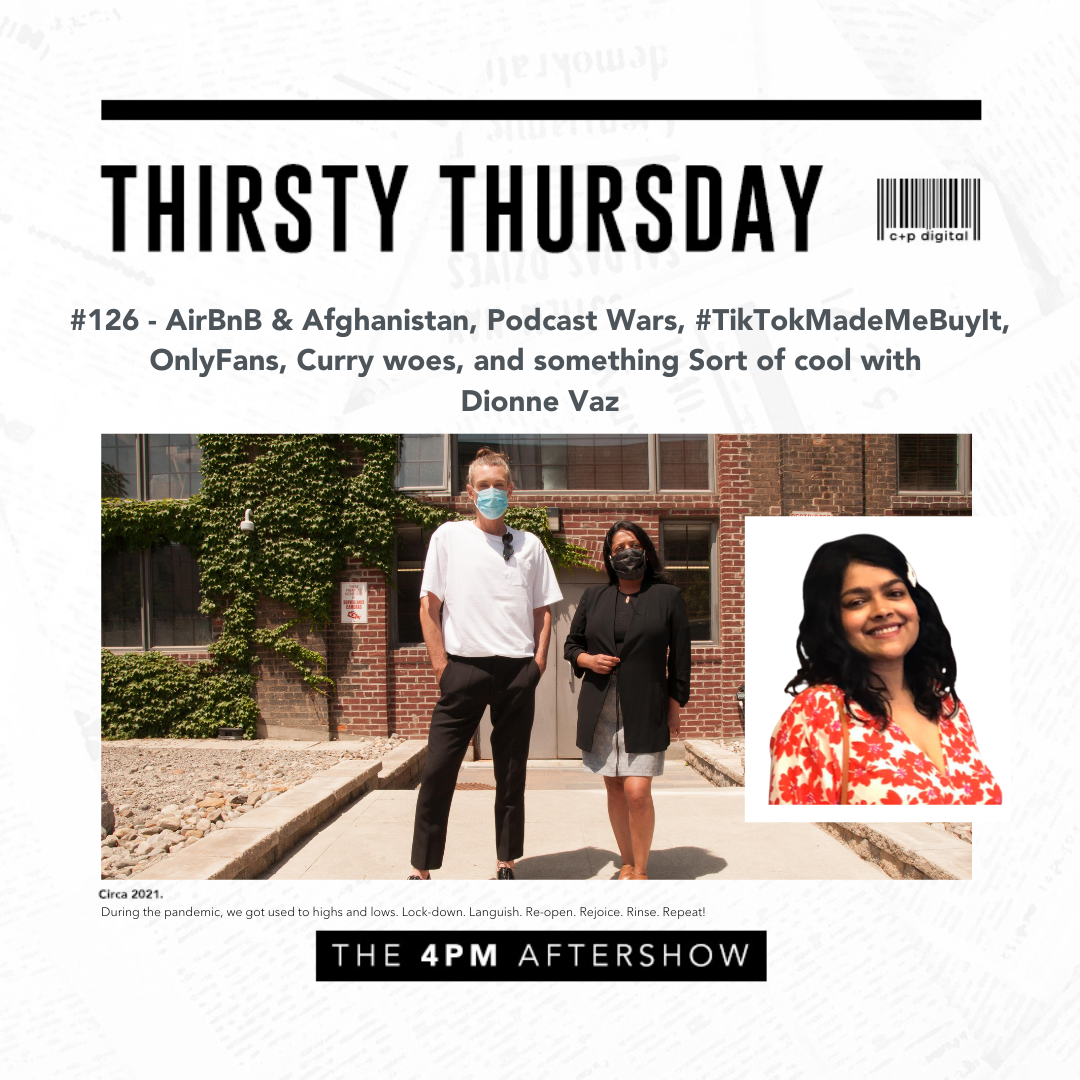 With birthday boy Will off celebrating, Susan is joined this week by Global Marketing Director of Shared Services & Outsourcing Network (SSON), Dionne Vaz for this week’s #ThirstList

The news cycle has been heavy the last little while and we’ve seen individuals and brands reacting to the situation in Afghanistan. One of the companies that is really stepping up is AirBnB, who are planning on paying for 20000 Afghan refugees to be housed in host homes.
This is fantastic, but not surprising, as this is super on brand for AirBnB. From Hurricane Sandy to the Pulse Nightclub shooting, they have been great in times of crisis.
One thing that bothered Susan just a little was that the story was rushed out with no real meat to it. So how are they going to go about doing this? What are the next steps? When you release things that are purpose-driven, make sure you include all the details in one spot so people get the dirt without all the digging.

Want to help out in Afghanistan but not sure where to start? Check out this link for a list of curated and verified GoFundMe campaigns.

Podcast Wars – Spotify’s on our radar again
At Spotify, after some beta testing, they have opened up Podcasts Subscriptions service to all US creators. Some of the highlight points:

1) No more FOMO – you want in, you got it!
2) Lots of detail on the pricing – we appreciate that they noted that creators like more flexibility in prices.

3) The ability to use RSS feeds

Apple already jumped on the podcast subscription bandwagon a while back, but Spotify, an Apple critic in the antitrust fight, is so far keeping their prices more affordable.

While we’re still swimming around in the realm of Creator Economy, we had some news this week about how TikTok is expanding its ecommerce efforts in a partnership with Shopify and are allowing creators the ability to affiliate with brands. Users will be able to shop right from their favourite TikTokker’s account. We heart a good UX. Instagram has used this feature well, so why not?

OnlyFans tries to pull out, but there’s a happy ending
This week OnlyFans, under pressure from banks and financial services companies, announced that they were banning sexually explicit content from the site. This decision was quickly reversed after a huge uproar from both fans and creators, many of whom are relying on their content as a main source of income. Talk about failure to identify both their target audience and target creators, but good on them for supporting their peeps in the end.
Curry is not a spice!
Padma Lakshmi, Indian author, actor, model, and tv presenter, took on The Washington Post and one uber-annoying opinionated writer who ranted about how much he disliked Indian food. Ok that’s totally fine, right? Not when you do it in a lazy, racist, and frankly non-factual way, claiming it’s the only ethnic food completely based on one spice – curry. Um, what? Ugh. Padma fairly kindly Instagram-shamed him whilst also cleverly plugging her new book, “The Encyclopedia of Spices & Herbs” Hello, newsjacking! We love it, Padma!
Sort of Thirsting in T.O.
From right here in the hood, a story of a new tv series called Sort Of, created by and starring Bilal Baig, who is the first queer south asian Muslim playing the lead of a primetime show. How freaking amazing that we get to live in this wonderful diverse city and now it is going to be showcased all over mainstream TV!