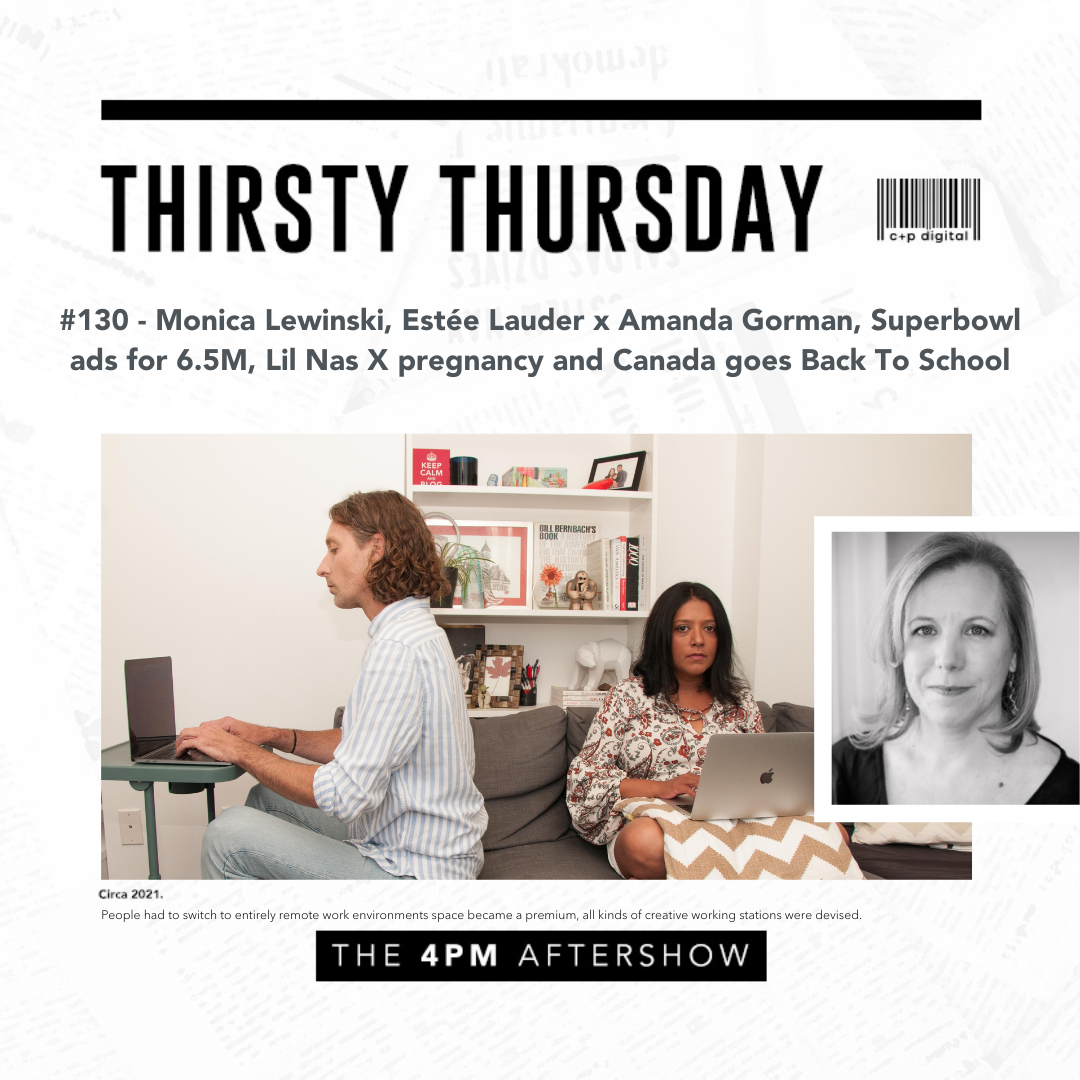 Attention thirsty readers everywhere! Do you have a story that’s got you absolutely parched? A news item, a marketing hit or miss,  something from the world of entertainment and pop culture?
We’re now taking story submissions. Send us a message and let us know your take on a story that caught your attention this week. We may even ask you to join us on our weekly LinkedIn Live chat show, #ThristyThursday.
She. Was. 21.
If you’re of a certain age, even if you’re not  American, you most likely remember THE presidential scandal of the 90s and have heard of Monica Lewinski. Considered the home wrecker of the century, the then-21 year old’s name was dragged through the mud after being groomed by a much older, powerful man, in a way that would be totally unacceptable these days.
Fast forward to now, the 48 year old has not only used her platform to advocate for anti-bullying measures, she’s producing her very own American Crime Story episode on the subject of the presidential impeachment. We love seeing the strength she has to rise above after years and years of abuse from the media.
Extreme Contract Makeover
When it comes to being the spokesperson of a brand, the contracts end of things isn’t always easy, breezy, or even beautiful. At least not until poet and activist Amanda Gorman came to the bargaining table and gave the whole deal a makeover. Now known as the “Global Changemaker” of 75-year-old and woman-founded Estée Lauder, Amanda says “I’m never just lending my body or my face. They are getting my spirit, my breath, my brain.” Over the 3 year contract, Estée Lauder companies have pledged to donate $3 million to support writing and equality initiatives. Yassss!
Superbowl ad spots are going…going…almost gone
If you’ve got a cool $6.5 million just hanging around, you’d better move quickly to grab your advertising spot during the Super Bowl. Despite a lackadaisical response to the game in February, including a huge advertiser backing out in favour of supporting vaccination initiatives, this year spots are at a premium and going fast. While we’re not super crazy into the world of athletics (Go Sports!), we’re obviously not going to miss out on the epic commercials that just happen to come along with those big guys pushing each around over a ball.
The birth of an album
Lil Nas X has been delighting us with his fearless marketing ever since he tossed in some red contacts, put blood into shoes, and killed the devil in one of the most controversial videos of the year. Now, in the leadup to the “birth” of his debut album, he’s taking the pregnancy theme to the next level. On top of posting many photos of his very realistic baby bump and counting down to his September 17th due date, he has now released a “baby registry” – a list of 15 charitable organizations (each matched to one of the 15 tracks on the album) people can donate to, including the Transinclusive Group and The Bail Project. That is one classy baby daddy. Even Obama got involved. Listen to the podcast if you want the deets.
It’s the most wonderful time of the year
Also possibly the most stressful time of this year, with parents wondering about how back to school is going to look once again with a potential 4th wave of covid on the horizon. Megan O’Neill (who subbed for resident host Will Lamont, who’s on a much needed break) is closely watching the Twitter bets on if and when schools will shut down again, sending her kids back to virtual learning, while Susan’s family has opted for virtual schooling. They can both agree that this is a huge topic on everybody’s minds right now.