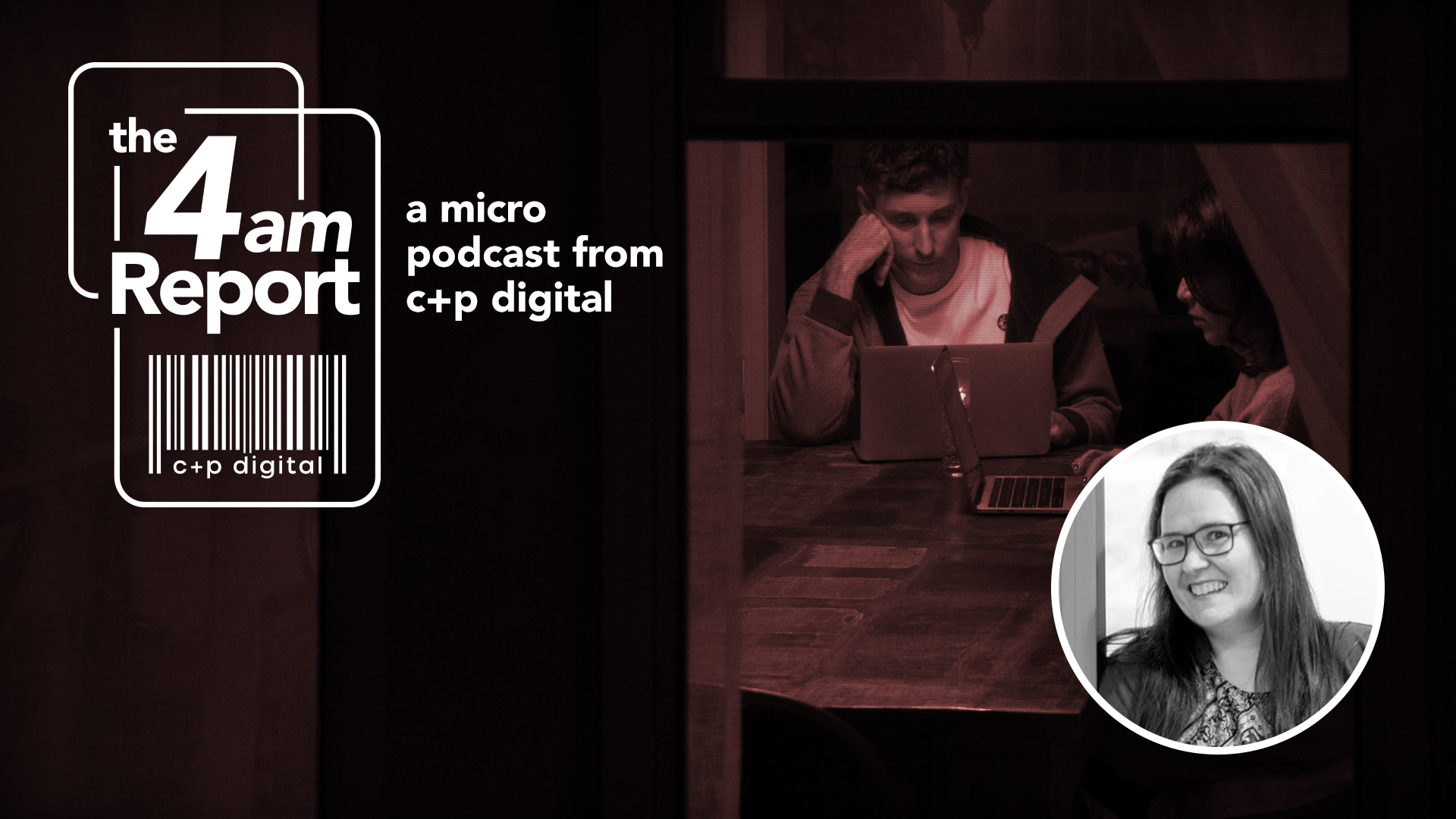 Facebook…🤔 Despite everything you’ve heard, for certain audiences, this is still the place that matters most.  In this episode of our wonderfully concise and informative micro podcast, The 4 am Report, we talk to someone who runs her successful business entirely through Facebook Groups.

Learn how Lara Wellman, certified business coach and owner of  the coaching practice, The Biz Studio, rules the Facebook algorithms.

Season 3 of the The 4 am Report is diving deep into the marketing things that keep business owners and communications departments wide awake at night.  We’re calling the season ‘The Dark Webbing of Marketing.’ Think Black Mirror meets Years and Years meets our middle-of-the-night insomnia.

Here’s an excerpt from the transcript:

Will: Lara, for small business owners looking to make Facebook great again for them, tell us why a group and not just a page. Maybe run down some of the benefits you’ve experienced from using Facebook groups.

Lara: Facebook in general is a really great tool. I like to use Facebook because most people, not all people, but most people are hanging out there in some capacity. Facebook pages are a great tool. I think most businesses should have one, but a group is the place where I get to connect with people. It’s where, as me, a person, I get to know other people. I get to engage with them. I get to build community. I get to feel like I’m having real connection, not just sort of blasting at them. I think that that’s the primary difference with a group is the people in the community have just as much of an opportunity to reach out and share, connect, offer value as I do. Whereas the page is always just me pushing forward. I think that’s the big difference, and that’s why it works so well.

Susan: Yeah, it’s that two way conversation. And beyond two way. It’s not just two dimensional anymore. It’s multidimensional, like you were saying, with people. It’s not just you opening a conversation, it’s other people coming in and asking questions. It’s a crowd sourcing of ideas. I think that community aspect of it is a big part. It’s certainly one of the reasons that I participate in groups is obviously the first layer of perhaps being a member of a group from someone’s perspective is the fact that there’s an insight scoop kind of idea. You do get some special content when you’re a part of groups and that’s certainly worthwhile.

Then there’s the community aspect of it. But also market research, like often if a group is in some way part of your customer set, it’s useful to see what their pain points are, what people are talking about, what is taking their attention, who are they buying from? That kind of thing is good information that you can get out of these. Talk to us a little bit about what you’re seeing in terms of how people are using groups.

Lara: Well I think lots of people are using it in different ways, and it’s about making sure that you know why you’re using it. You have to have a sense for what it is that you’re trying to create and where you’re trying to take people. For me, my Facebook group is my first place to take them beyond they’ve heard of me to really getting to know me. Then just like you said, there’s like the VIP experience, the extras they get, the way that I get to get information from them is also the market research. They get to help me figure out what videos I’m going to do, what my next training’s going to be, what workshops I’m going to do, all of that kind of stuff. But that also makes them feel like they’re getting a VIP thing because they’re getting to have input in all of this stuff. But at the same time I’m like, “What do you guys actually want to know about?”

Susan: Exactly. I think going back to that two way where you’re benefiting in both ways. As well, you know from a user’s perspective, I often wonder how do you fit all of this in? I know we wanted to talk about that with you a little bit is that when people are using social media, we get asked a lot. It’s like, so how do I do this? How do I fit it all in, and how do I get the conversations and no one’s saying anything to the stuff I posted? We’re like, what are you saying to other people, is often our question. Are you hopping on there and having conversations? Are you only just popping one comment in and then not acknowledging any of the responses or not really even seeing what other people had to say? That’s not a conversation. That’s just a drop. So let’s talk through that a little bit. How do we engage? I mean obviously we’re talking about it from the perspective of a group, but whether group or otherwise, what can engagement bring to the Facebook algorithm?

Lara: There’s a few things there. One is a Facebook group is a lot of work, but the question is, is that worth it for you? So just like a podcast for example, it’s also a fair amount of work. But if that’s the thing that you want to do, if that’s the thing that’s fun for you to create, then maybe that’s the good use of your time. When people ask me about Facebook groups, I’m not like, everybody needs one. Because especially in the beginning – I’ve had mine for over four years now – In the very beginning, I spent so much time in there. I would do weekly group chats. I would be in there every day multiple times a day. I would answer every single comment and question. I was in there full on. I don’t need to be there at the same capacity anymore, but I really did need to nurture the group in a strong way in the beginning so that people felt like it was a place that conversation happened.

I’m not saying that this doesn’t ever work, but you’ll see groups and they just have the same weekly prompts every day all the time. That’s good, but you also need to make sure that people feel like it’s a real place where people are actively connecting. 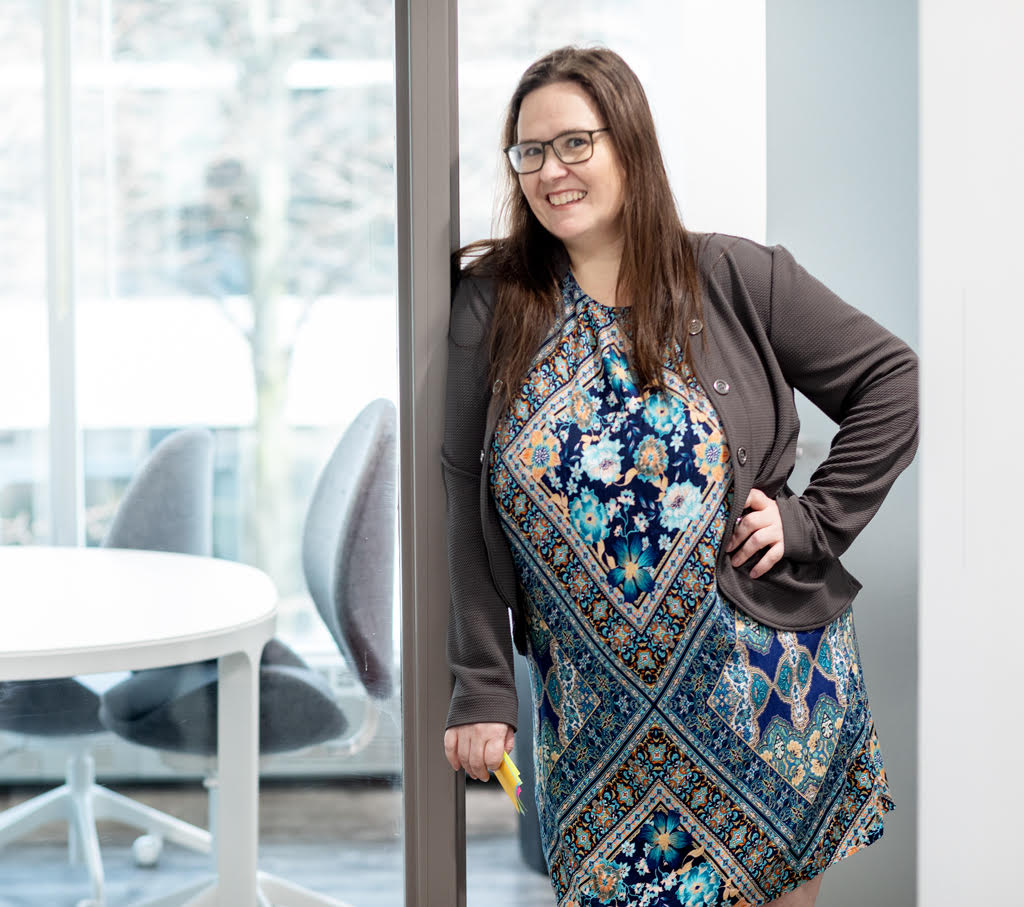 Lara is a Certified Business Coach who believes small business owners can make more money, love the work they do, and still have time to enjoy their lives!

Through coaching, group programs, workshops and events, she helps business owners get the clarity they need to take the right action for them and their business.