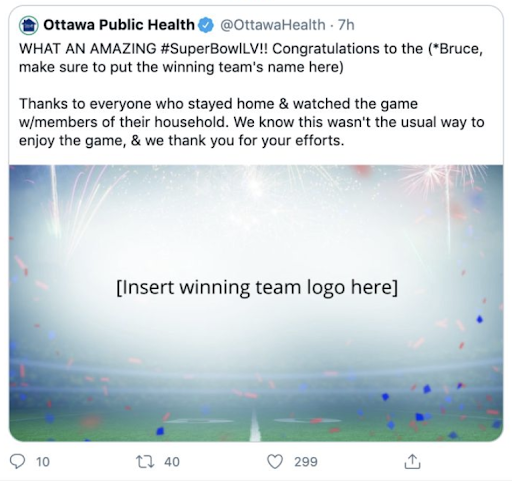 Kevin Parent was up with his newborn.

It was Superbowl Sunday.
The night every marketer and communicator watches closely to see who sacrificed the most dollars at the altar of brand-building.

Kevin and his team were not done with the fun for the night, however. They had one more play planned. And because he was awake anyway, he decided he’d be the one to kick it off.

And the now iconic character, Bruce, who the Twitterverse rode in to save, because of his most relatable mistake of hitting publish on something that had very important information missing. 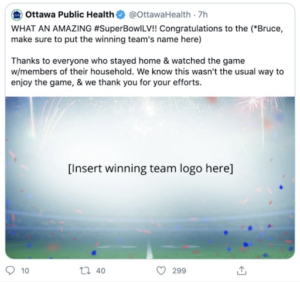 As soon as Kevin put the Tweet out, people noticed. Kevin began to interact and engage with all those making comments.

He was having fun!
He found himself laughing out loud. (Not the kind you type in your chat, the real kind.)
The kind that could wake a freshly-back-asleep newborn.
Which would have been a whole issue unto itself.

Kevin knew this would go well. He and his team had planned for this.
But even he couldn’t not have predicted what was about to happen.

How does that happen?
How does one municipal public health account garner behemoth level exposure and engagement.

(Flash back to the Thursday before the Superbowl)

Ottawa Public Health (OPH) sent out five posts with different embedded health messages that Thursday. You know, healthy eating, balancing alcohol with water, only being in-person with the members of your household during lockdown – that sort of thing.

Your standard day of health messaging for Kevin Parent, head of social, at OPH.

For some seasonal fun, Kevin and his team put a little Super Bowl theming into their batch.

(For those reading this who are unfamiliar with these heroes of health communication, know that OPH is up there with the best when it comes to incorporating humour into deeply unsexy subjects such as Covid-19. So when they put Superbowl theming into things, they set out to do it while not taking themselves too seriously, and really getting noticed.)

We’re a municipal government account, we are not cool, thought Kevin. We are not that cool brand that people are going to be looking to interact with on the subject of the Superbowl.

So, the first of the five posts said, “this weekend is Super Bowl Sunday, assuming one team scores more points than the other team, that team will likely win.”

Another said, “if you’re watching the sports match, and you prefer to watch the sporting match…”

An overall tone that made it clear to anyone reading “we are not football people” is what Kevin was going for. OPH was mocking themselves a bit, employing some good, old-fashioned self-deprecation.

The Bruce tweet was a continuation of this series.

Bruce was born because Kevin was convinced there had to be a way to bait up some engagement. As the owner of a deeply scientific, verging on boring, social media profile, he was always looking for ways to draw engagement out and get people talking to them.

A couple of months before the Bruce Tweet, OPH had a sexual health tweet. It contained the words “Chapter 68”.
This was a bait, because the obvious joke was 69.

Kevin and his team knew that people in the health communication space who knew of them would instantly engage and start replying, saying, “Why wasn’t it 69?”

Those baiting situations were not unfamiliar to Kevin.

So, Bruce followed in that rich tradition.

The original iteration of the tweet didn’t have a name in it. Just “(insert winning team name here)”.

Kevin decided they had to give “the intern who forgot the winning team” a name for no other reason than to humanize the person.
“You had one job, Bruce!” was the emotion he was hoping to elicit in the masses.

“And somehow something about the name Bruce was easy to get mad at”, Kevin thought to himself.

It garnered likes and replies along the way. One of Kevin’s favorites was the person that said, “Bruce is either a really deep sh!t. Or, Ottawa Public Health is about to say ‘Now that you’re all here, we’re asking you to stay away from people.’”

All that was left for Kevin to do was to legitimately just copy the tail end of this person’s tweet!

So Kevin hit reply to him directly about two minutes later saying, “now that you’re all here, wear a mask, and stay away from people!”

A massive part of OPH’s social media strategy is something that is often overlooked by brands – getting in there, and engaging with people.

Completely unlike the days-of-yore-approach of crafting an amazing message, sending it out and washing your hands of it before you move on and declare it didn’t work. For OPH, the process doesn’t even START until the message goes out.

Once it goes out, they are on a mission to get people interacting with them, and having conversations in the comments and replies.

This real-time interaction is what makes audiences trust you, and render them likely to interact with you more.

It was 1am when Kevin went back to bed on Monday morning.

He remembered because his newborn woke up again and had a bottle before Kevin finally closed his eyes happily, thinking “that’s it for the night. I spent a good, good couple of hours, just just answering everybody. That was a lot of fun!”

Ps: That is the opening chapter of my FIRST book: The Other EQ: Brand Entertainment quotient – how to find it, keep it, and use it.

If you’ve read and enjoy this column, “The Other EQ” on how to be a lot less boring in marketing, please consider helping me pay for the publishing of the book.

Yes! I’ve been writing in one form or another for 20+ years and finally summoned up the nerve to write a BOOK.

It will be ready in the fall, and I will send a copy to everyone who contributes, regardless of amount. Please note that I chose Patreon for the creator platform to raise these funds. It’s been set up as a monthly $10 fee, if you sign up, you can cancel at any time including after your first month. Any amount you choose is appreciated!).