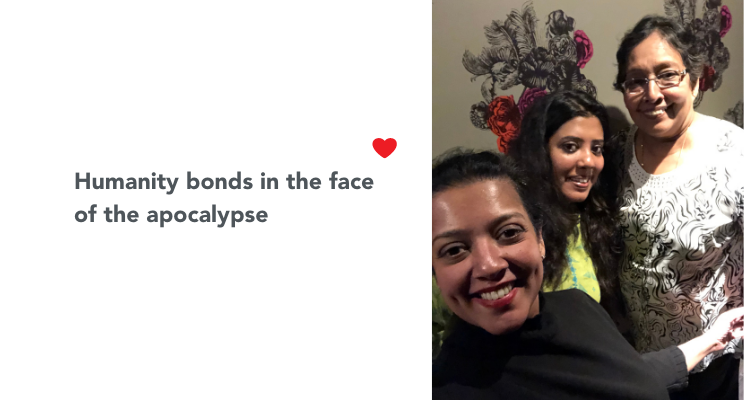 If that’s the coverage you’ve seen in the past few weeks about India, then good for you. You care more than most of the world, and for that, most Indians, me included, will thank you.

And there’s more to the story than that. There always is 💬

2 weeks ago, my mom and my sister, who live in Chennai, India, called me. That dreaded call when you’re far away from family. They had tested positive for Covid-19.

(Cut to the end: They are fine. Back home and recovering. The rest of the story is below 👇)

When you live very far away, oceans away, you don’t want to get the call that says “We are COVID positive”

My mother is in her 70s and my sister, while young and healthy, has asthma. Given their co-morbidities (shudder! that word!) they were told to immediately go into hospital.

Now, this is a side of pandemic-India that I want you to see 👇

Here’s what happens when a COVID test comes up positive in India, sensational headlines of faked tests and result tampering notwithstanding. The test is passed along to the municipal-level government body because there is actually an official social security system in India now. For a billion+ people. Let that sink in.

The local government called them quite quickly to help find a hospital. Because in India healthcare is private, they even asked ‘would you need a private hospital, are you okay with a government hospital?’

To which my mother was pretty clear she’d like whatever hospital could keep her alive.

The community rises to the challenge 💜

My mom has always been wonderful with people. And her community came to her rescue. Her doctor, who also in her church group pulled out all of the stops, called around to several hospitals, and found them both beds.

It’s only the two of them; they live together.
When you have COVID, It’s not like you can call an Uber, climb into it and go your merry way to the hospital.
So, they called for an ambulance.

And here’s the thing, there are no ambulances either folx.

Which would deter most. Not my sister. My sister is a special sort of superhero. She said, “Listen, I am sick, but I can drive a short distance, so I’m going to drive.”

She told the doctor, who gave her EXACTLY the courage she needed to pull that off.
“You can do it, you’ll be fine. Just focus, climb in your car and get yourself over here, there’s lots of parking.”

My sister drove herself to check into her covid ward 🤦‍♀️

They live in a second floor apartment. They carried their hospital luggage down the stairs, touching nothing on their way, because they didn’t want to touch elevator buttons.

This is the side of India you’re not going to hear about in the mainstream media, folx. This high level of human consciousness.

Meanwhile, the frontline battles on, uncomplaining 😢

Hospital rooms are being turned over so quickly, it’ll make your head spin. Kudos to the frontline staff who are doing this. They literally discharge a patient, clean the whole thing down, and get someone in there in a couple of hours. This is not easy!

This is not easy.

Humanity bonds in the face of the apocalypse 🖤

Through it all, the hardest thing to manage is your mind, they said. Every 20 seconds there’s an ambulance screaming in.
Staff are overworked, doing way too much.

It’s not easy, folks, it’s not easy.
But people are coping.
And here’s a story to tell you why I believe there is hope in all of this.

My sister said that one night, the nurse in their ward came in looking rather panicky and asked if my sister had paracetamol. My sister said, “Yes, I have a few but you’ve already given me a different painkiller, do I need to take more?

The nurse: “Can I take them from you please? There are several patients on the floor, who are in pain, and all of the pharmacies have completely run out of painkillers. I’ll bring it back to you in the morning.”

And my sister gave it to them.

I was surprised by that. What makes you do that, I asked. What made you, in the middle of the apocalypse, hand over your painkillers? Wouldn’t you be holding on for dear life???

And I’ll never forget what she said to me.

“You don’t understand what it’s like. I see people sick, dying, and waiting for people to die or be well so they can get care. When you’re in the middle of the apocalypse, that’s when you DO hand it over, because you can see the pain around you’ll do whatever you can to stop it even just for a minute.”

When I said she was a saint, she argues she’s not alone. There are many doing the same things to alleviate someone’s pain.

So the next time you look at an article about crematoriums in parking lots in India, I invite you to think about the other side of it.

India does really, really well when it’s back is up against the wall.
And this time will be no different.
Systems may fail. Communities never do.

A big fat shout out to my mum.
She’s taught us from the time we were very, very young the value of a community. When we fell behind staying in touch with people, and “nurturing relationships” she would call us lazy. Saying we should treat people with respect, and be there for other people just because.
Her community came to her rescue ✅