May and June of 2021 have been heavy for Canadians. Many Canadian brands and individuals are trying to figure out their articulation and actions in light of the bloody past of a nation coming to light surrounding the residential schools in Canada. All while navigating thoughts around a day of celebration.

It’s beginning to be widely recognized that what we know so far is likely just the beginning. There’s a lot more coming.

In moments of reckoning surrounding a deep social injustice like that which Indigenous people in Canada have endured at the hands of settler colonialism, it’s hard to think about what to say, or how to make any sort of impact from a marketing and communication perspective.

For small businesses, specifically those between 1 and 5 million, navigating crisis communication – the guilt, the burnout, the uncertainty on how to go about doing business while this is the backdrop – can be a LOT.

How do you balance life in a global pandemic with ongoing self awareness and discovery?

How might small businesses be empathetic, self-educating allies, while respectfully doing our job as business owners, which often requires actively marketing and selling what we do?

If you, like us, believe that your teams, your partners, your collaborators, and your customers are your greatest assets, you really want to be thinking about what is challenging them on the daily and either:

Towards that end, here are The Three Bs Holding Back MANY small businesses: Budget, Bandwidth, and Burnout, and some thoughts on navigating them

The burnout part in particular is something we think is appropriate reading for a time in history when people are maxed and overworked in the extreme.

Yes, budgets are potentially the largest obstacle for many people, so we wanted to break down the budget thing a little bit. A few things can help when dealing with a lack of budget:

And when it comes to making those almost non-negotiable investments in marketing (visibility is non negotiable if your goal is growth, so marketing tends to be a line item on most small business budgets) our ‘secret sauce’ is not s secret.

And take each piece of content you create, and fully make it count. We call it the Anchor Theory of content marketing and it helps build out a library of valuable thought-leadership material in a variety of accessible formats. 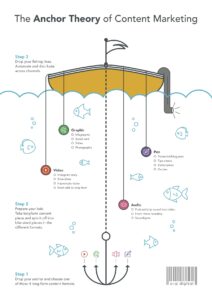 Who isn’t feeling a little overwhelmed these days?

When it comes to mental bandwidth, we haven’t even begun to quantify how overstretched small business teams aree.

Covid-19  has left a majority of small business stretched  thin ( understatement!) – servicing clients (YAY!), planning for ongoing post-pandemic survival, while still finding the time to toot our horns with our own content output. (Add to it a lens of social awareness reckoning!)

It’s CRAY!! BUT not impossible.

Let’s attempt to tackle that  BURNOUT!!!

If you’re NOT suffering from some form of burnout at the moment, well bully for you, Mr. Robot! We certainly are, and so are most of the peeps we chat with on the regular.

Home schooling/summer management of them kids (depending on where in the world you are).
Work-from-home.
Money stress.
Loss of rituals and routines.
Keeping a business afloat.

This year has already been a DECADE and yet, we all must keep going.

And one big thing that helps in times of stress and uncertainty? Humour. Little moments of joy.

Think about injecting humour, levity, and laughter into your marketing in a respectful way regardless of the backdrop. The tone is most important.

You don’t have to be the Court Jester, but don’t be afraid to have – and share – some fun!

If you would like to read more about employing a type of entertainment that helps soothe the collective cortisol, you should read our guide to ASMR as a tool for marketers in times of crises.

If you’d like to listen to a more detailed version of how to help manage budget bandwidth and burnout for small business teams, listen here!

This episode is an updated production of a series produced at the end of 2020, captured here.

So. Here we are again, taking the wind out of our own sails re: our celebrations around hitting the FIFTY EPISODE milestone with the 4 AM Report.

With the protests against police brutality happening in the U.S., and around the world, we put the brakes on that shizz, and instead want to talk about crisis communications.

Earlier in the week, we published what we jokingly called “Episode 49.5” – well, today it’s the 4 AM Report episode 49 and three-quarters! 😂

Our point? We’ll get to episode 50, eventually. But now is NOT the time for back patting!

And YO! All you brands out there should be on this same page.

This episode started from a place of having seen one influencer voice after another get it WRONG. And then come up with self-indulgent apologies – which do not serve their audiences.

Talk Crap, then Walk it Back = WRONG

Everyone from mayors, politicians, influencers, business voices, sports stars (we see you Drew Brees, walking your crap-talk back), and large brands have walked on shaky ground this past week.

They’re either being conspicuously quiet or they’re taking a miss-step and then trying to be defensive.

And the mea culpa apologies don’t cut it.

Look, we’re all human, we all put our foot in our mouths from time to time – but b*tch, please.

Unless you’ve been living under a rock the past week and a half, you shouldn’t have to be walking your talk back – you shouldn’t be talking that crap in the first place!

So, that prompted a discussion that raised a question:

Is there a CRISIS 101 FRAMEWORK?

We decided if to create our own – and share it with you, because people are hurting, and the last thing anyone of us wants to do is add weight to that pain.

We broke it down into 5 areas. And here’s just a bit of what we talked about.

“Acknowledge the problem, whatever crisis we’re in – acknowledge that something’s different or out of sync or atypical, if you will. The opposite of acknowledging is if you just continued with your promotions and your planned automation, as usual, there’s no acknowledging already, people are going to say, or see, that you’re in a totally different dimension than everyone else right now. And already, that’s not a good thing. A whole bunch of digital people out there, the big voices, have started picking on people who are doing that already: “Listen, tone deaf human, at the very least shut down your automation funnel!”

Be Agile – Like, “Switch Gears in an Hour” Agile!

“Nobody wants you to be fixing the world’s problems. They just want to know that you’re not that one unaware dumb ass in the room, right? And be humble about it – you don’t have to publish a blog post and tell everyone about it. You just have to reach out to a few people who are likely to resonate with that messaging. Make a few calls, write a private email to your client list to test [your messaging] out. Then call on your team! Once you trigger that crisis button, everyone

needs to get as agile as possible. What is true today is changing tomorrow. Reaching out to your team, making sure you’re all on the same page. And again, even with what you’re putting on social, if you have an expert [in tone on staff] to rely on check if you’re not sure. The number of large names that we’ve been seeing, who are getting into trouble, people are calling them out because of tone, or they’ve had to make a public apology. This is the time to reach out to your teams, guys.”

Hope for the Best, But PLAN for the Worst!

“It’s called scenario planning. It’s the idea of ‘If This, Then That.’ Work out the three possible things that could happen if I stay silent? Or, what happens if I make a specific statement that applies to me? What happens if I say something that is against the grain? Like really work it out, spend time on it – people pay good dollars for this kind of thing? And really focus on the worst case! Once you are prepared for the worst case, things go a little bit easier, right? Especially because in the climate we’re now we want the brands that we like and follow and are aligned with, we want to align ourselves with brands that do take stances on things that we value. We want to know that where I buy whatever is adamantly against what’s happening right now in the United States and is as outraged as everyone else. But again, it’s how that’s communicated. And when you do take a stance, you are opening yourself up for a lot of praise, but also potentially a shit ton of criticism and backlash. And that just the price you got to pay, to play!”

The only way to seriously prevent long lasting damage from “taking a stand” is to really play out those scenarios. Don’t wing it. And don’t ‘speak’ before you think.

There’s so much more on this subject in the episode – catch the whole thing here. I hope you’ll have a listen.

And while you’re there – subscribe to us – you won’t regret it!