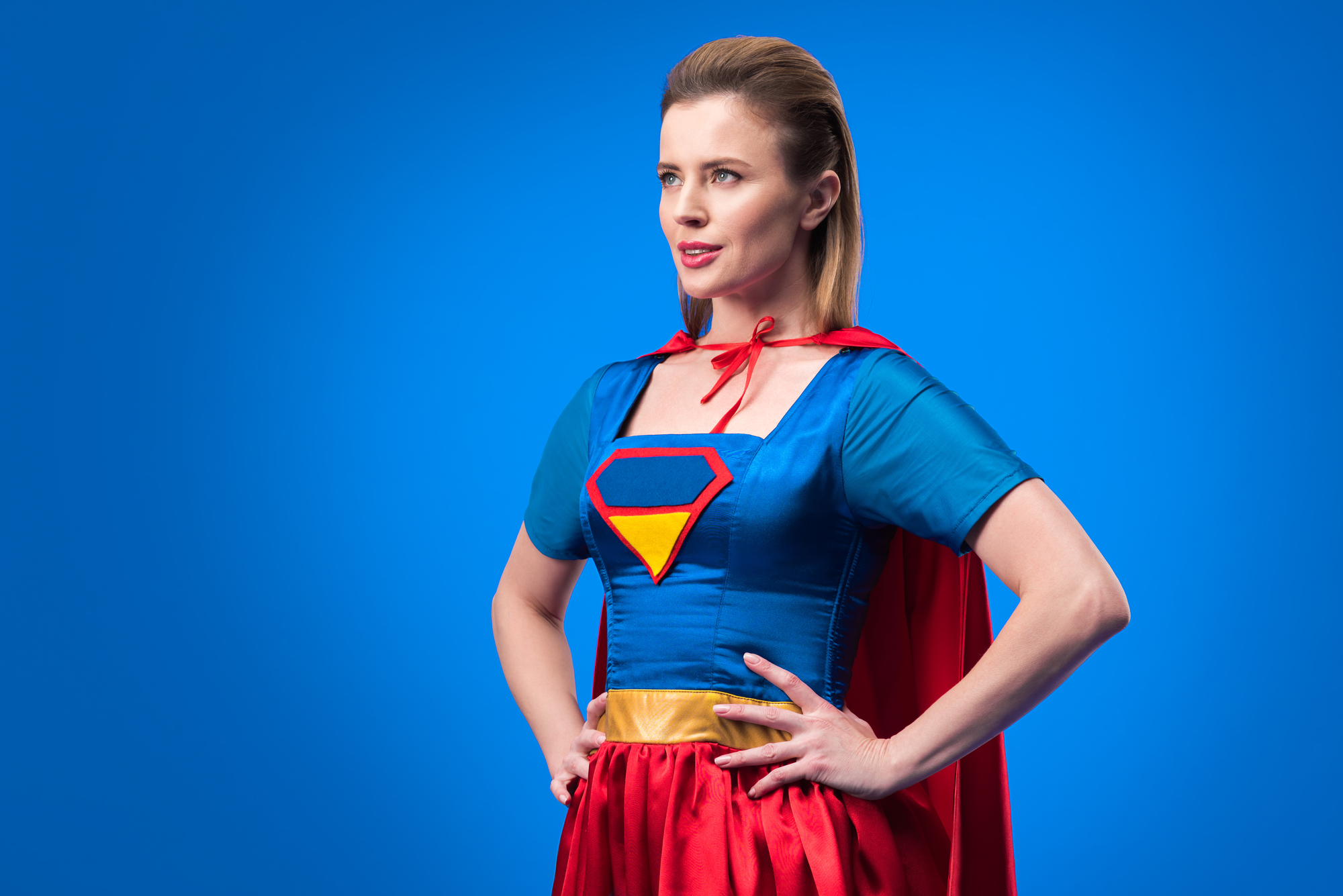 This is a deeply soap-boxy call to women business owners! Read on if that’s you. If that’s not you, read on anyway. We need allies 😊

For a few years I’ve been guided loosely by my obsession with ‘micro’ content.

It may originally have come from my subscription to the idea of goldfish level attention spans. That doesn’t apply to your committed followership. For whom you must craft carefully penned longform content, in a variety of formats. But you don’t get committed followership unless you get a lot of people to see you first. So micro was the way to that, in my world.

As a team, we’re all about customizing customer experience, whatever your budget, so we had clearly defined 2 audiences for our business.

We carefully crafted content for years, that separately targeted each of those audiences.

Bear in mind our budgets are small and our time available is even smaller, but we prioritized and pushed ourselves out of our comfort zone and persevered. This was not easy, or cheap.

I noticed one key thing along the micro experiments. The content that was having the most success was the content that was targeted at female entrepreneurs. Interestingly, it seemed to be getting the best quality attention from our corporate audience.

They commented on it, giving it kudos.
They reached out privately.
They connected us to people.
They gave us contracts!

And I just couldn’t figure it out.

And finally I cracked it!

(With superlative help BTW, this is not a pattern I would’ve cracked myself because I was too close to it.)

The reason the corporate head was interested in the small business content is because it was content that was doing a good job of connecting with their intended audience on some level. And they were attracted to our ability to do that.

It’s a woman we’ve given the loving moniker ‘Kristen’.

To make this simple, let’s just tell it like it is. Kristen is you, if you’re a woman entrepreneur reading this.

Kristen is consumer 2.0. She’s the modern investor, the tech decision-maker or heavy influencer, the person that buys the product the apps the service; and pretty much everybody’s new customer. And very, very often, she’s some variation of flexibly-employed.

We’ve spent yonks getting to know variations of Kristen. And here’s a tiny tip of that iceberg in a snippet of a love note I wrote to personify this fine human.

An Ode to Kristen

She will tell you vehemently that superwoman doesn’t exist.
And she’ll try every day, anyway.

She’ll take on more than a pair of small-ish shoulders should bear.

And ace it every time.

Sometimes she’s a solo entrepreneur who just wants to pay her bills while she puts her focus on something else. Whether it’s building a human, a side business, or travelling the world.

Sometimes she’s on a mission to be the founder of next ‘Glossier’ or ‘Rent the Runway’.

She’s overwhelmed a lot.
Has too much on her plate.
And doesn’t like to let go of control easily.

Because she reminds me of me.
She’s some variation of every girlfriend I have. (And more than a few self-employed guy friends.)

And helping her for no real reason other than that I love her, and I think she can make a massive difference in the world, is high on my list of priorities for life.

There are very few things I know with certainty but this I do. Growth strategy is my jam. And growth will come for everyone only if they learn to definitively capture Kristen’s attention.

Because whether B2C, or even B2B, large companies are starting to recognize Kristen.

However, they have no idea how to connect with her. And we are her.

So, how come we aren’t calling for greater accountability from the brands we consume? From the people who sell to us?

How come we get regularly hit with mindless re-targetting on patronizing products that have little to do with us besides a random tag of #female?

How come brands are still talking to our husbands, or even our fathers, about money and legal advice and so much other stuff?

How come brands are beginning to recognize that Kristen is where their disruptive growth will come from, yet have no idea how to make the content in those bastions of male-hold (finance, technology, legal, health) relevant to her?

How come a whole gender is still in the CSR and minority budgets of major brand marketing plans?

How come so little emotional intelligence is applied?

How is there so little understanding of the fact that there is a political and sociological shift that’s happening in the world?

“The last few years have been a time of political upheaval for women — from the rolling back of a rule designed to help shrink the wage gap to a record number of women elected to both state and federal offices in 2018.1” And while those are US stats, they are pretty indicative. Add in the #MeToo movement’s inherently shackle-breaking implications. And abortion laws in the US. And we have ourselves a time in history that is unprecedented.

Are we as women absorbing the economic implications of this?

To my mind, when an entire gender is fully coming into its own, one of two things will happen:

What needs to change?

Well, women are now definitive decision-makers. But… that doesn’t seem to be reflected in the fabric of life and business now does it?

A whole, entire gender has become a market for products and services like we never were before. But… for the shit that counts, we still need to go talk to the ‘big boys’.

Let me spotlight one micro economy within that female awakening opportunity: women entrepreneurs.

Take a look at the stats.

“Four of every 10 U.S. businesses are owned by women, with female-led businesses having grown a spectacular 58 percent from 2007 to 2018”, according to this 2019 Women in Business report2.
“Businesses owned by women (Kristen!) generate $3.1 trillion in revenue.

To make this illustrative, let’s walk through one factor that’s key to Kristen. A financial factor – the largest frustration of women owned businesses – funding.

Let’s extrapolate for a minute. What is the opportunity vs reality for funding for women entrepreneurs? (US numbers)

35% of women entrepreneurs have expressed that raising capital is their number 1 challenge3.
40% of all businesses in the US are female owned.

The remaining 4,116,000 women business owners are fighting with their banks and other financial institutions to give them credit, or, just playing small.

Or… there’s another or. The clever ones are finding their micro-economies.

Let me tell you a little story.

I go to a lot of events specifically geared to women entrepreneurs. Many of them are paid events of high-quality, because I have no time to waste when it comes to the growth of my company. I’m looking for superb learning, and connections on the same wavelength. And it is a world that can satisfy any niche, so i find them.

As many of you know, it’s not that men are not welcome at these events. They certainly aren’t the girls’ equivalent of the ‘boys’ club’. But they certainly are geared to the key audience and attract women.

And when I say that to people, I’m afraid they’re going away with the idea that it’s all feminine and flowy facebook ads selling me event tickets.

Pink and purple widgets anyone?

Telling you how you’ll find more time to fit in Pinterest-worthy lunches for kids. No?

In reality, women-only targeting is a bit more emotionally intelligent.

Understanding consumer behaviour and how that translates to search terms and associated content. Distilling pain points. Telling the right stories at the right time, well. And not being afraid to go to the taboo subjects.

These are some of the things that have successfully attracted me to events with women I’ve enjoyed hugely.

Now, at these events, there are some men. Often a couple; 5 at best.

Why are some men there?

Usually because they are with an organization that is either speaking at or sponsoring the event on some level. (Which is very smart! Great place for market research, which is why it surprises me that more people aren’t there. But I get ahead of myself.)

On one occasion, a few years ago, I was at a women’s event. I was there with a male work bud of mine (not Will Lamont) who is sometimes my wingman at events since we target a few of the same ones.

We were at the event a couple of days and ended up chatting a lot. Since he’s a pal, and he knows I love controversial talk, he asked me a few questions I don’t typically get asked.

Topline of the convo: he asked how some of the smaller groups tick. ‘It seems like they buy each other’s product and the market is really small, so how does it work?’

‘Well, it’s a micro economy’, I said. ‘It starts, and extends, and collaborates, like an M&A growth strategy in some cases. Works everywhere else, why not here?’

He seemed to get it. I suspect mostly because he likes me and thinks if I’m smart and making time for it, there’s a reason. But also because he has advanced emotional intelligence, and is captivated by the psychology that drives consumer behaviour of all types. That’s why HE was there.

This seems almost too simple to explain but I’m labouring the point because there are so few large brands that are getting the power of the secret audience they are missing out on. And because of it, women owned businesses are not getting the access they need to many things.

Women owned businesses are missing out on tech solutions because people won’t see them as an audience worthy of regigging enterprise solutions for.

Same goes for healthcare. Women’s health is minimally understood by the mainstream and made witch-burning levels of yucky by the wellness industry.

Name an industry and we’ll tell you how a massive opportunity is being missed by large brands, forcing us to find our tribes and hack our way around the system.

Why does this happen?

Because they women-owned businesses are just not taken seriously enough in the mainstream, IMO. Many of these businesses are dismissed as ‘mompreneurs’ or ‘women and their pretty things in their little Etsy stores’. And I’ll admit, often it can look like it’s cutesy and insubstantial.

There are so few Sarah Blakelys and Emily Weisses that have taken it all the way.

And it’s easy enough to dismiss.

It’s a long way before the world is filled with female Unicorns. Agreed.

But guess what? On the way there, many, many women owned and led businesses are not too shabby, people. The numbers prove it. And we as women founders of different type need to ask for greater accountability from the brands that sell us things. Pushing them to create and modify and regig things to work for an all new audience that wields power.

Get brands to listen to you and know you.

Get brands to get accountable to Kristen.

4There are 30.2 million small businesses in this country. Small businesses comprise 99.9% of all United States businesses. https://www.fundera.com/blog/small-business-employment-and-growth-statistics